The summer after I turned eight, Mom put me on a Greyhound bus headed to Spanish Fort, Alabama, to spend a few weeks with her older sister Pauline and her husband Jack. We spent most of the time at their fish camp near Mullet Point on the Eastern shore of Mobile Bay. It was glorious just to fish and swim all day long! And, there was some extra excitement, too.

“Wake up, Johnnie!” Aunt Pauline shook me hard; she was serious.

It was ‘zero dark thirty’ and before I could open my eyes, she withdrew into the darkness leaving me all alone in the bunk room. I didn’t need a second shake though. Not now. It was a Jubilee!

I pulled on my clamdiggers and slipped on my worn-out Converse All Stars and headed out the screen door into the moonlit darkness. I hurried across the expansive backyard leading to the shoreline.

A “Jubilee” is a rare and sporadic natural phenomenon that occurs in the shallow coastal waters of Mobile Bay where during the pre-dawn hours flounder, shrimp, crabs and other demersal sea life congregate en masse at the waters edge in search of oxygenated water due to oxygen depletion in the deep waters of their normal habitat. For a few hours, the lethargic sea life is easily gathered in vast quantities, much to the glee of the locals as the event becomes a huge celebration up and down the coastline.

Photograph by Adam Wyman via Unsplash

After my eyes adjusted a bit, I spotted Aunt Pauline’s son Bobby with some of his buddies pumping up the Coleman lanterns that were fixed with those silver flounder reflectors.

As the lanterns flickering to life I caught a glimpse of Uncle Jack pulling two empty wash tubs toward the bay shore, and I followed.

Bobby and his friends were close behind, each with a lantern in one hand and a long gig in the other. In the dancing light of the gas lanterns they approached the shore all the while thrusting and shaking their harpoons in the air testing the balance of their chosen weapons, like Spartans running toward a skirmish line, spears in hand.

“Come help me grab these crabs, Johnnie, and we’ll have gumbo for supper!”

“Come on, Johnnie!” Aunt Pauline had spotted me. She laughing so hard I’ll never forget it. Her bright red hair was up in a do rag of sorts and her crazy colored clamdiggers were already soaking wet from sloshing around in the brackish bay water where she was harvesting the stunned blue crabs that were literally giving themselves up at the shallow water’s edge.

“Come help me grab these crabs, Johnnie, and we’ll have gumbo for supper!”  And, we did. And, I’ll always remember her for the way she was that night – funny, spirited, and loving to catch, cook and eat fresh seafood.

Photograph by Adam Wyman via Unsplash

There’s nothing like the taste of seafood gumbo to bring back memories of growing up along the Gulf Coast.

Every cook living along the Gulf Coast has his or her gumbo recipe. In fact, my cousin Margaret in Fairhope, Alabama has a business called Olde South Foods that sells her gumbo base.

The real litmus test for a serious gumbo cook is making the roux, which is the foundation of a great tasting gumbo. Show me a poor roux, and I’ll show you an epic fail.

Traditionally, the roux is simply wheat flour browned in some type of oil that forms the gumbo ‘base’ upon which this delicacy is contruced.

It’s sounds simple, but it’s incredibly tricky to perfect the roux. Undercook the roux and you don’t have any flavor. Overcook it and it will burn faster than you dreamed, and once burned you can only start all over!

Was it even possible to make a gluten-free gumbo without wheat flour while retaining the traditional gumbo taste? That was the challenge, and we’ve figured it out.

We scoured the web for gluten free gumbo recipes and found that rice flour was the substitute flour of choice. Almond flour was a credible candidate because of its great flavor, but it was a little too coarse and burns quickly. Coconut flour was too absorbent and its flavor was just too strong. Where else could we turn?

Singoda Flour to the Rescue

Having experimented lately with Indian Singoda flour as a single-ingredient coating for fish and chicken before deep fat frying, it occurred to us that Singoda flour may be the answer to a perfectly brown, but not overpowering roux. And, it was. 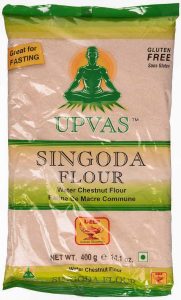 Singoda, also known as Singhara, is a gluten-free flour made from dried water chestnuts (to be distinguished from the chestnut tree nut). It’s basically a starch. Singoda has traditionally been used as a thickening agent, like corn starch or arrowroot flour. And, as we said, it also lends itself as a single-ingredient coating for fried food that yields a result much like tempura. An added bonus is that there are no reported allergies to Singoda.

We were expecting a large turnout for our seafood gumbo feast, so we made an extra-large batch probably yielding at least 8 to 10 quarts before it was over. (We just couldn’t stop adding stock!) Here’s how we made our gumbo.

Getting close to take off!

Since we were making gumbo for a party of 12, we brought out our Mafter 14” carbon steel skillet to begin crafting our roux. (You can ‘throttle back’ this recipe by ¼ or ½ for smaller audiences.)

A carbon steel skillet has all the attributes for crafting a great roux. It retains heat well, is thin enough to heat quickly, and if cured properly it is incredibly non-stick. It also holds heat well, so you need to be ready to turn down the gas. I’ve seen cast iron skillets used for frying roux and some cooks go for the one-pot approach of just making the roux in the same stockpot to which they will add the gumbo ingredients. Other great gumbo masters make the roux in a cast iron skillet in a 350 degree oven stirring only every 15 minutes or so for up to 2 hours or so, which I would consider living on the edge, but I’ve seen it done, and it works.

We brought the skillet up to medium heat and added a little more than a cup of bacon fat we’d reserved from Maverick hickory smoked, sugar-free, uncured bacon we’ve been enjoying lately.

Once the fat is stabilized at medium heat, stir in 1 and 1/3 cup of Singoda or rice flour and combine, stirring continuously with a wire whisk, a wooden spoon/spatula or heat resistant flexible spatula/spoon. (This is the exercise part.) As soon as the two are combined, cut the heat back to medium low and stir the roux continuously for 15 to 20 minutes until the roux reaches a dark brown color. (This is the tricky part!) 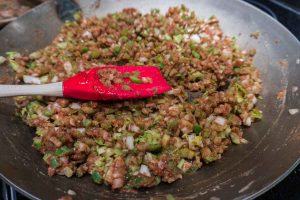 Add in the onions, bell peppers and celery to the roux and stir for about 5 minutes to soften the vegetables. Add the garlic and stir for a minute.

Transfer the roux and vegetables into a large stockpot over medium high heat and add the stock, then the bay leaves, salt, cayenne pepper, fish sauce, Worcestershire sauce and thyme.

Bring the mixture to a boil and then cut back to a simmer for at least an hour, skimming any excess oil or foam from the gumbo.

Stir in the okra after about 45 minutes so as not to overcook it.

About 10 minutes before you plan to serve the gumbo, combine the shrimp, crab meat, oysters and fish in a large bowl and toss with a quality creole seasoning, such as Old Bay, Emeril’s Essence, or your own creole seasoning concoction.

When you are about ready to serve, add the seafood and cook for 3 to 5 minutes more, but be careful not to overcook.

Sample and re-season if necessary.

Garnish and serve over rice.

This site uses Akismet to reduce spam. Learn how your comment data is processed.